I am the good shepherd; the good shepherd lays down His life for the sheep. 12 He who is a hired hand, and not a shepherd, who is not the owner of the sheep, sees the wolf coming, and leaves the sheep and flees, and the wolf snatches them and scatters them. 13 He flees because he is a hired hand and is not concerned about the sheep. 14 I am the good shepherd, and I know My own and My own know Me, 15 even as the Father knows Me and I know the Father; and I lay down My life for the sheep. 16 I have other sheep, which are not of this fold; I must bring them also, and they will hear My voice; and they will become one flock with one shepherd. 17 For this reason the Father loves Me, because I lay down My life so that I may take it again. 18 No one has taken it away from Me, but I lay it down on My own initiative. I have authority to lay it down, and I have authority to take it up again. This commandment I received from My Father.

How do we know if something is good?

In short…we think something’s good when we like it.

A good song to one person is just noise to another.

Some people think liver and onions are good.

Much like they judge their food or favorite music.

Two times in this passage Jesus says, “I am the good shepherd.”

The rest of it explains why He’s the good shepherd.

It is Scripturally accurate.

It’s not Jesus’ opinion that He is the good shepherd.

This is a statement of truth.

So, let’s begin to appreciate Jesus as the good shepherd by understanding what that means.

His statement itself explains this when we break it down.

You remember in Exodus 3 reading about God calling Moses from shepherding his flock to leading His people out of Egypt.

Moses says to God, “Behold, I am going to the sons of Israel, and I will say to them, ‘The God of your fathers has sent me to you.’ Now they may say to me, ‘What is His name?’ What shall I say to them?”

Coming back to John, Jesus’ claim to be the good shepherd is one of four “I am” statements by Him.

In essence Jesus is saying, “I am God…the good shepherd.”

Let’s think about “the good.”

There are two words in Greek for “good.”

It refers to the highest level of goodness.

Jesus is saying He is the exceptional shepherd.

Out of all the shepherds before or since Me…I am the most excellent.

Now let’s think about the word “shepherd” itself.

The shepherd is used as a metaphor for God and godly qualities throughout the Old Testament.

Psalm 23, The Lord is my shepherd.

Again, Moses was shepherding his flock when God called Him.

Then we have Ezekiel 34:1-2, when God denounces the priests and religious leaders of His people for their corrupted practices.

So, when Jesus says, “I am the good shepherd” He’s contrasting Himself with all of the other shepherds of the past.

Compared with them, I am the most excellent, divine, unmatched shepherd.

Objectively speaking from Scripture, Jesus is announcing He is the Messiah.

Better than Moses or David.

After Jesus establishes His status as the good shepherd…

He then goes on to teach the disciples what He does.

Let’s understand these four activities of the good shepherd.

He who is a hired hand, and not a shepherd, who is not the owner of the sheep, sees the wolf coming, and leaves the sheep and flees, and the wolf snatches them and scatters them. 13 He flees because he is a hired hand and is not concerned about the sheep.

Here again, Jesus compares Himself to the false spiritual shepherds of God’s people.

The good shepherd in this metaphor doesn’t run when He faces danger.

Like David before Goliath, the good shepherd stands against threats to His flock.

1 Samuel 17:36, Your servant has killed both the lion and the bear; and this uncircumcised Philistine will be like one of them, since he has taunted the armies of the living God.

Shepherds were the working-class heroes of their culture.

Without them the community’s food supply chain breaks down.

They oversee the main source of protein, dairy (goats) and wool for the people.

If they fail…it affects the whole village.

Shepherds needed to be brave because someone or something was always trying to invade the flocks.

And sheep are the rare animal without any natural defense mechanisms.

They can’t even really run from predators.

Without a shepherd to protect them, all they can do is huddle together when attacked…

With those inside the flock protected and the outside totally vulnerable.

We’d be as defenseless against spiritual attacks as sheep hunted by ravenous wolves.

Here’s Paul describing those without His protection in 2 Corinthians 4:3-4.

And even if our gospel is veiled, it is veiled to those who are perishing, 4 in whose case the god of this world has blinded the minds of the unbelieving so that they might not see the light of the gospel of the glory of Christ, who is the image of God.

Theirs is a hopeless case until the good shepherd performs spiritual surgery giving sight to the blind.

He does promise His protection…

As we participate with Him.

Psalm 144:1-2a, Blessed be the Lord, my rock, who trains my hands for war, and my fingers for battle; 2 My lovingkindness and my fortress, my stronghold and my deliverer, my shield and He in whom I take refuge….

We can’t be passive observers to the assaults…then wonder why our faith is fragile.

What the church needs today is holy boldness.

Bravery in the Body of Christ.

To stand against the devil’s schemes.

Church…realize that you are the last line of defense against the moral decay of this nation.

Only the church of Jesus Christ…as He leads us.

He never called…tasked or commanded the church to a ministry a ministry of affirmation.

For His people to affirm the immoral and unbiblical choices people make because we’re all created in His image.

It is because we’re all made in His image and His unconditional love that we are appointed to call out sin…in all its forms…within and outside the church.

So, that people may be reconciled to God.

We are not called to a ministry of affirmation…

We are called to the ministry of reconciliation.

Affirmation is for spiritual cowards.

As followers of the good shepherd…we’re to be courageous.

I am the good shepherd, and I know My own and My own know Me, 15 even as the Father knows Me and I know the Father….

The Greek word for “know” here is ginóskó (ghin-oce’-ko).

It means to have experiential knowledge…first-hand knowledge of someone or something.

Shepherds would know their flock this way because of the time they spent and the variety of experiences they have with it.

They’d come to know each animal’s particular markings, habits and the sound of their individual wavering cry…their bleating.

The shepherd knows his sheep completely.

This is how the good shepherd knows His sheep…completely…perfectly.

Our Lord has first-hand knowledge of us as our Creator and Sustainer.

The good shepherd knows where we should go and the best path for us to get there.

He knows how to discipline and satisfy us.

These are ways the good shepherd knows us…His sheep.

Jesus said, “I will know My own and My own know Me.”

We don’t know Him perfectly…completely…it’s not the same way for us as it is for Jesus.

We know Him redemptively…savingly…we know the good shepherd as our Savior.

This is how His sheep know Him…as their Savior.

This is the foundation of a true relationship with Jesus.

That we know Him as our Redeemer.

You may know about the good shepherd…but you don’t know Him.

I can know about Japan but I don’t know the place until I truly experience it.

And when Jesus says, “Even as the Father knows Me, I know the Father…”

He proclaims perfect…experiential…first-hand…knowledge of the Father.

The same…equal…understanding of one another because they are one-in-the-same.

Jesus, again, claims equality with the Father…divinity of Himself.

I have other sheep, which are not of this fold; I must bring them also, and they will hear My voice; and they will become one flock with one shepherd.

Now Jesus introduces His redemptive work among the Gentiles.

That’s who He’s referring to when He says, “The other sheep, not of this fold.”

The good shepherd will do something no one ever thought possible.

His unity is a full unity.

Not a superficial union in name only, symbolic…but an unbreakable bond.

1 Corinthians 12:13, For by one Spirit we were all baptized into one body, whether Jews or Greeks, whether slaves or free, and we were all made to drink of one Spirit.

As people united in Christ…we have more in common with each other than with our unsaved family members.

Because we have Christ in common.

We are more united with our saved Catholic believers than with our lost Baptist church members.

Want to take this another step?

As a white, black or Asian Christian you have greater unity with your brothers and sisters in Christ than the unsaved of your own race.

Because we are one flock with one shepherd.

You may be thinking…it doesn’t feel like we’re united.

I look around and see all the divisiveness…the discord today.

That’s because the flock tends to wander away from the good shepherd.

With heads down…like grazing sheep…aimlessly moving further and further from Him.

It doesn’t mean we’re any less His sheep…

We’re just less attentive to His voice…to His word…to His call.

Until we can barely hear Him from all the other noise.

The further we get from Jesus…the louder the distractions get.

Church…it’s time to come back to Christ.

He is our uniter.

Whenever we wander from Him, we become divided…separated from one another.

The divisions in the churches are all the evidence we need to prove that we’re meandering away from the Messiah.

I’m not suggesting we don’t talk about the critical issues of the day.

But our divine call is to make disciples…not to be sociologists…social engineers.

The fact of the matter is that if we did more biblical discipling there’d be less dividing.

It makes us more unified with the culture.

And Christ will never be unified with the fallen culture.

Church…it’s time to come back to Christ.

Risking…even giving their life…for the flock was a natural expectation of good shepherds.

Whether it was fighting off predators, thieves, or the elements…

Of course, He’s referring to His own death on the cross.

It helps us grasp the significance of what Jesus teaches by understanding the particular Greek word He used for “life.”

Psuche refers to the soul…which speaks of the whole person.

The essence of a person…who they are on the inside.

So, Jesus not only felt the physical agony of His death…

His soul was tortured as He bore the Father’s wrath for our sins.

2 Corinthians 5:21 explains, He made Him who knew no sin to be sin on our behalf, so that we might become the righteousness of God in Him.

The violence against His soul was amplified exponentially by the purity of His innocence.

We understand the punishment of a guilty man.

But the killing of an innocent life is a miscarriage of justice.

Unless the innocent one willingly gives his life to save others.

Jesus’ sacrifice for us wasn’t a miscarriage of justice His was an act of grace.

Ephesians 2:8, For by grace you have been saved through faith; and that not of yourselves, it is the gift of God.

Jesus is the good shepherd. 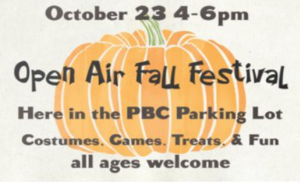 Don’t miss our Fall Festival!!! It will be a great time for the entire family.  See you October 23!